My Moron Tax Weekend: Chapter One

This past four-day weekend was an Odyssey of moron tax.  On Saturday, I committed one small error in judgment that got me stranded far from home.  It took me nearly four days from that point to find my way back.  On that journey, I got stuck in 2 cities that I never thought I'd visit, spent three hours in a tow truck, abandoned my car in Reno, rented three cars in three days, drove through a violent hail storm, and wasted more than one thousand dollars.

What happened?  As Homer might have said, Sing in me, Muse, and through me tell the story....

Chapter One: I Hit a Rock with My Car 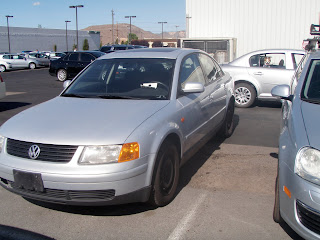 For the Fourth of July weekend, my boyfriend and I decided to spend a few nights camping around Peeler Lake in the Hoover Wilderness.  The Hoover Wilderness is on the eastern side of the Sierra Nevada.  To get there from my house, we would have to drive several hours on Highway 108 and traverse the Sonora Pass.  Because Highway 108 travels over a high mountain pass, it is notoriously steep, curvy, and narrow.  It also goes through relatively remote territory.  There are no cellphone signals in that part of the country, the towns are many miles apart, and there are no public phones or public transportation to speak of.  If you car breaks down, you are stranded until you can hitch a ride from a kind stranger to the closest gas station, which may be more than 40 miles away.
I was coming around a corner on Highway 108 when I saw a huge rock in the middle of my lane.  The rock was a chunk of the mountainside that must have broken off and tumbled into the road perhaps just moments before I arrived.  I had less than two seconds to make a decision.  Although I braked, I did not have time to bring the car to full stop.  I did not want to veer right, because, at such speed, I could careen into the mountainside that runs along the highway.  I also did not want to veer left and cross into the opposing lane.  Instead, I decided to run over the rock and hope that my car could clear it safely.  Of course, it didn't.
The car slammed into and then violently bounced over the rock.  There was a crunching sound so loud that it could be heard over my involuntary screaming.  When I regained control of the car, I pulled over to the side of the road ahead of the rock and jumped out to assess the damage.  I could see splintered bits of my car strewn across the road.  Part of my bumper had cracked off.  Worse yet, I could see a trail of black motor oil leading from the rock to my car.  From past experience, I knew that such a drip meant that my car was heading towards total system failure.
My boyfriend and I hopped back into my car and drove in the direction of the nearest civilization.  Despite the trauma, the car drove well and carried us almost twenty miles to the nearest gas station in Bridgeport, California.  After we reached the station, I turned off the car and ran inside the station for help.  When I got back, there was a puddle of motor oil beneath my car, and my car was dead.  We were now stranded 231 miles away from home.
This was the beginning of my weekend.
To be continued...
**To give you an idea of what it was like to run over the rock, I would say that it was worse than this:

but better than this: