The Final Chapter:
Tow Me to the Biggest Little City 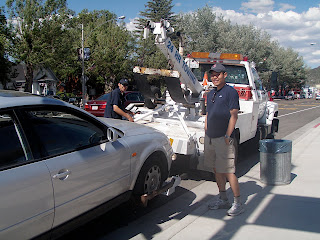 As I wrote in my past two posts, I got stranded in the small town of Bridgeport, California, when my car broke down.  Because the car broke down on the Saturday of the Fourth of July weekend, I had to wait until Monday before the local mechanic, Steve, could buy the right transmission fluid and pump it back into my car.  On Monday morning, Steve set out to search all the open auto parts stores in the 200 mile area to find what I needed.  Poor Steve.  Three hours after he left, he called me on my *phone in a slightly frantic tone.  "I'm in Bishop (about 90 miles away), and I am standing outside the only European auto parts store in the Eastern Sierra.  I have been to at least four automotive parts stores and this is the only one that carries your transmission fluid.  They only have one bottle left.  They can order more, but it'll take at least two days and then I have to drive down here again."  He sounded so sorry.  "You should probably get towed to Reno." 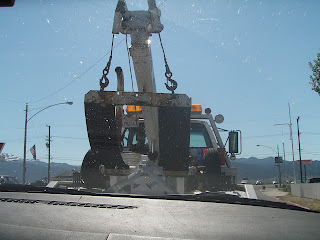 On to Plan D.  Reno, the closest city, was 115 miles away from Bridgeport.  I called Shelley at AAA who kindly offered to tow me there for $450 ($125 less than the standard $5 rate).   "One catch," he said, "the dog is going to have to stay in car.  He can't sit in the tow truck."  Poor Teabiscuit.  My boyfriend and I decided to ride in the car, as it was towed, to keep my dog company until the state border.  Once in Nevada, my boyfriend and I were required, under state regulation, to sit in the tow truck.

About three hours later we arrived in the tow truck at the one VW dealership in Reno.  At this time, it was six o'clock at night and the dealership and service department were closed.  We left the car on the lot and called a taxi to find us a place to stay.  The taxi took us to the Grand Sierra Casino Resort.  "I know they take dogs," the taxi driver told us. "Sold," I said.
On Tuesday morning, I rented a car while the dealership took a look at my car to see if they could repair it.  While my boyfriend, the dog, and I were exploring Reno, Mike from dealership called my cell phone.  "I've got bad news," he said.  Although more than a few people said, "I've got bad news" to me in the past two days, this time it really hit me in the gut.  "Do you understand what it means when your car is totaled?" Mike explained to me that my car's transmission was severely damaged as was the transmission mount and possibly the body mount.  As my car was very old, the actual value of the car was less than half the cost of repair. 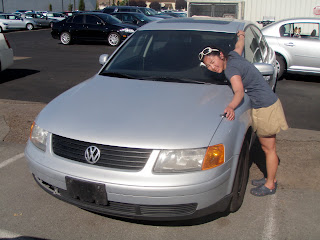 Aside from, perhaps, receiving a diagnosis of cancer, I couldn't think of worse news.  I loved my car.  For twelve years, it faithfully carried me over 145,000 miles without complaint, even though I would let years go by before washing it.  My car pushed through snow-laden midwestern winters, endured three 2000 mile trips between Chicago and Los Angeles, and bumped over mile of rocky off-road terrain.  Last year, I left it at the cold Whitney Portal trailhead while I went hiking.  When I returned to the car 19 days later, the car -- despite the neglect and old age -- started on the first turn of the key.  Totally exhausted and in desperate need of a hot shower, I had hugged my steering wheel with tears seeping out of my eyes.  For all the abuse I heaped on that car, it was always ready to take me home.  Even in its last act, it brought me to safety before dying.

I went to the dealership to clean out my car and say goodbye to it for the last time.  Irrational as it was, I felt horribly guilty.  I shuddered thinking about the tow truck hauling it to the salvage yard where it would sit alone and abandoned until it was picked apart for its parts or, worse, smashed into box of scrap metal.

Afterwards, I rented **another car so that I could finally start heading back home.  While I was sad about the outcome of this weekend, I was feeling relief that I might be back home in about five hours.  But then, as I turned onto the highway that climbs over the mountains that separate Nevada from California, I saw dark clouds swirling over the mountain pass.  Bolts of lightening flashed.  "Now what?!" I demanded from the Fates.  No sooner said, a freak hail storm pounded the car.  We heard bullet-like pops as the hail stones -- as large as one-inch in diameter -- slammed against the windshield and roof then bounced to the ground.  Water flooded the road up to the top of the tires, and I worried that the little Yaris I was driving might stall in the middle of this insanity.


We did make it through.  About 84 hours after I hit the rock with my car, we were back home.  That first night back in my own bed was the best sleep I had in a long, long while.


The End.
*  On the first day in Bridgeport, I got no signal on my phone (T-Mobile) or my boyfriend's phone (AT&T).  By Monday, my boyfriend and I had found three separate spots about 2x2 feet where we would could get a signal on our phones.  We discovered that as long as we did not move from these spots, we could make and receive calls.


**  I mentioned that I rented 3 cars in 3 days.  On Monday, I rented a car while I waited for mine to be evaluated at the dealership.  I had to rent a different car to drive back home to California, because the first rental agency does not allow interstate transfers.  The day after I got home, I had to transfer to yet another rental car that I could use for the week while I shopped around for a new car.


*** As a final note, I don't normally wear Crocs outside of my house.  They were the only shoes I had in my possession that weekend other than my hi-top hiking boots, which are uncomfortable to wear in 90+ weather.


****Like Bridgeport, Reno has a lot of  charm.   To read about our good times there, see my Update Post.