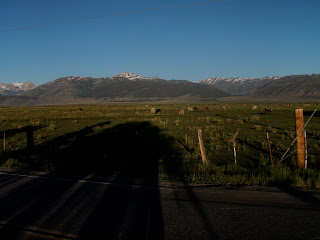 As I wrote in my previous blog post, on July 3, 2010, my car broke down at the gas station on the edge of the small town of Bridgeport, California.  I had run into a large rock that, in turn, ripped a hole in an oil pan, causing my car to lose motor oil until the engine could no longer run.  When I ran into the gas station to ask for help, I was informed no one there could help me.  "Find Steve," I was told, "He's the only mechanic in town."  I asked at the gas station across the street and got the same answer: "You need Steve, and Steve's not here."  When I called the local AAA affiliate to locate a mechanic, the dispatcher asked, "Isn't Steve there?"


It took some time to find Steve.  The rodeo was in town -- I mean that literally -- and Steve was enjoying it with his family.  This was not only a Saturday but a holiday weekend, and he was rightly on vacation.  Lucky, for me, though, word somehow got to Steve that an idiot fool tore up her car running over a rock and needed his help rather desperately.  Steve was nice enough to follow up and find me at the gas station to offer his services.  He, my boyfriend, and I then pushed the car over to his garage and Steve examined the undercarriage.  He came back with sobering news.  As it turns out, the rock did not merely crack the oil pan, it crumpled one of its corners.  The pan looked as if Superman had punched it in anger and left an indent in the shape of his fist.  The rock also ripped through some wires and chipped off sizable hunks of the metal frame.  Despite how bad it looked, Steve would try to patch (J-B weld) the oil pan.  If everything went perfectly, the patch could allow me to limp home with my car. 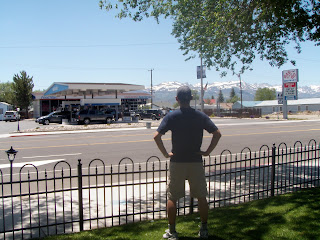 With hope in our hearts (and wild, delusional optimism in our minds), we left Steve to his work, bought ourselves some burgers for lunch, and then lodged ourselves at the one coffee shop in town.  The coffee shop was across the street from Steve's garage, so we could watch the progress.  Around 5 pm, Steve called me over for the bad news.


"The rock," Steve explained, "cracked your transmission pan.  In order to weld the pan, I had to drain out all the transmission fluid."

"I welded your pan, and it looks really good.  But, your car isn't like most cars.  Most cars have a place in the engine for you to pour in transmission fluid.  You car has a sealed transmission, so there's no place for me to pour the transmission fluid back into your car."

"There is no way to fix your car until -- best case scenario -- I can drive down to Bishop (a town about 1.5 hr drive away) on Monday (today was Saturday) and find the transmission fluid you need and then use a pump to get the fluid back in the transmission."

Here is a comprehensive list of the challenges I was then facing:
I did not feel I had much choice.  There was no place to go.  I left the car with Steve on the instructions that he should try to fix the car on Monday.  My boyfriend and I set off to see if we could find any place that would squeeze us in for two nights.  I felt desperate.  I could see the neon "no vacancy" lights of the motels turning on in the dusk-light.  We walked up and down the main street, stopping random strangers for advice on where to go and what to do.  People were warm and kindly, but everyone turned up the same answer, "It's July 4th weekend.  It's the biggest weekend here.  Everything's probably sold out."  Someone suggested that we ask the church if we could camp on their lawn.  I started to wonder if we should appeal to the Sheriff Department for a ride somewhere, anywhere, that would have a bed. 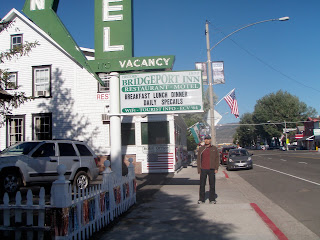 At last, we came to the Bridgeport Inn.  They had the last available room in town. I jumped up and down as relief steamed out of me until, I realized, there was a catch.  No dogs allowed.  I started to beg the proprietors for compassion (and frankly, propose to pay a double rate), but they told me that health laws forbade dogs in the room because it was above a restaurant.  I relented and quietly paid for the room.  My boyfriend and I spent the rest of the night sitting in the warm night air at the local burger joint with Teabiscuit, until it got late.   Around 11pm, we walked the dog back to the car where he would sleep alone that night.  I bedded Teabsicuit down and left him with a bowl of water and doggie treats.  He didn't even bark or whimper when we closed the door and walked away.  When we got to the hotel room, I cried.
To be continued...
*This is a blog about moron tax, so I focused my story on the stress and series of unfortunate incidents that plagued me.  At that same time, there were some really fun and great times.  Bridgeport is a really cute town with tremendously friendly people and a great spirit.  If you want to read about the bright side of the weekend, visit my updates.