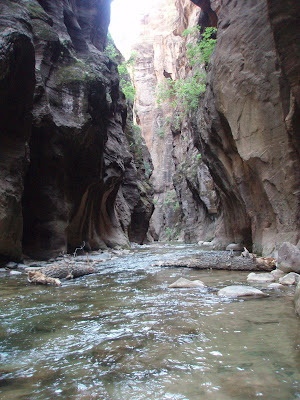 There is a trail in the Zion National Park in Utah that travels 16 miles down the Virgin River. The trail is the river itself, and it winds down the deep canyons of red desert rock. It's a hiking trail of imposing and thrilling beauty.

For years I had dreamt of hiking this trail, and it was not until August of 2007, that I finally got the chance. I secured a campsite and coveted hiking permit. I drove eight hours to Zion National Park. I threw down my gear and, in my excitement, only slept a few hours before I got up at 5am to meet the shuttle that I had paid a handsome fee to drive me to the trailhead.

While on the shuttle, I took an antibiotic. At this time in my life, I was sometimes visited by a minor, but irritating ailment. Because I did not want anything to spoil my trip, I took the pill as a precaution. It is, of course, a stupid thing to take a pill when you're not sick. It was an even more stupid thing to take that pill on a completely empty stomach. I'm not quite sure what to make of the fact that I furthermore ingested a pill that was at least one year past its expiration date.

I first vomited on the shuttle ride up to the trailhead. I vomited again about three miles into the hike. I vomited for a third time about six miles in the hike. I vomited for the last time about ten miles into the hike. Each occasion was painful, heaving, and pathetic. I had no food in my stomach, so my body struggled and convulsed to expel whatever it could. I could, at most, cough up a few unsatisfying mouthfuls of bile, spit, and red-koolaid. I would be sweating from the effort after each occasion.

What was supposed to be a wondrous life experience was now a suffering, potentially life-threatening situation. I had to cover 16 miles of difficult trail before sundown. For most of the time, the water level was anywhere from ankle- to waist-deep. The air temperature was also brutally hot (about 100 degrees). At the same time, the intense nausea did not permit me to eat or drink water, and I could only walk at a much slower pace. When I was not vomiting, I was trying not to vomit. There was, moreover, no other human within miles of me. I was a prime candidate for an untimely death by dehydration, exposure, and self-loathing.

The nausea subsided after eight hours. I completed the trail in twelve hours and climbed out of the water just as the sun started to set. I would not be able to eat again until the next afternoon.