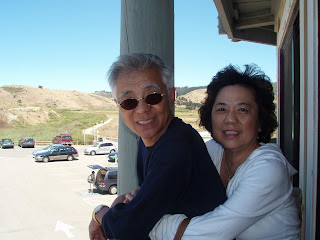 To the casual eye, my parents are sweet and easy-going people. They stroll wherever they go. They pleasantly banter. Their favorite pasttime is deciding on the next place to eat, and they both fall asleep on car rides longer than five minutes. In practical reality, my parents are a powerful, game-changing phenomenon known to lawyers, meteorologists, and the French as a force majeure.

Merriam Webster dictionary defines force majeure as (1) a superior or irresistable force; or (2) an event or effect that cannot be reasonably anticipated or controlled.* Force majeure describes hurricanes, earthquakes, invasions by space aliens, global thermal nuclear war, and all other events that are wildly unpredictable, hugely destructive, and impossible to contain. It also aptly describes a visit from my parents. 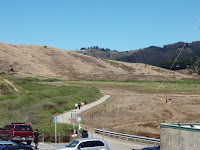 One summer, my parents decided to meet me in San Francisco for a tour the Bay Area. I picked them up from the airport and drove to our seaside hotel where our balcony overlooked a pretty patch of land with a walking trail. I had barely finished squeezing their luggage into the room before my parents strolled out the door to explore the trail.

The trail lead to the top of a high sandy dune overlooking the ocean. We paused to ad 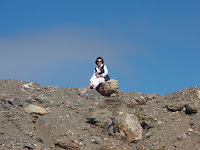 mire the view. Standing at the edge, my father noticed a small cliff below that jutted further out over the ocean. He pointed toward the cliff and asked, "Hey Wen, what do you think if we go down to get a better view?" I took a long look at the steep, gravel slope leading to the lower cliff and at the soft, leather loafers on my father's feet. "I don't think that's a good idea, Dad. It's too dangerous to go off the trail." I turned away to snap a picture of the coast. I had only taken my eyes off my father for a few seconds when I heard my mother call out, "No...no...don't go..." I whipped around just in time to see my father walk over the edge of the dune.

He started running down the slope and, for a moment, he looked as though he was doing so with purpose. But then, his upper body started to tilt past his feet, and it became obvious that he was actually falling and his feet were only running to catch up to the rest of his body. He tilted further and further until he looked like a goose about to take flight. When his upper body became parallel to the ground, his left foot turned on the gravel, his torso neatly swiveled at the waist, and he landed with a crunch on his right side.

I bolted down the slope. My father had landed beside a sofa-sized 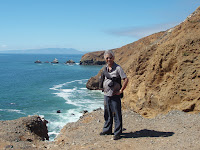 boulder at the base of the cliff, and I thought with terror that he might have hit his head. I could hear him groan in pain. When I arrived at his side, he sat up, looked up at me, and said, "Boy, that slope was steep."

He hadn't hit his head. My father did, however, break one of his ribs. At that point, my parents' visit was not yet three hours old. We would spend the next several hours searching for and waiting at a local emergency room.

*see Merriam Webster's website: http://mw1.m-w.com/dictionary/force%20majeure
**In case you're wondering, I made it safely down the slope because I have some hiking experience my father did not have and was able to identify a safer way down. Also, the desperate desire to attend a loved one in pain sometimes lends you powers you don't normally have. With parents like mine, I call upon those powers often.