The Cuteness Factor: Or, The Dumb Things I Do for Furry Creatures 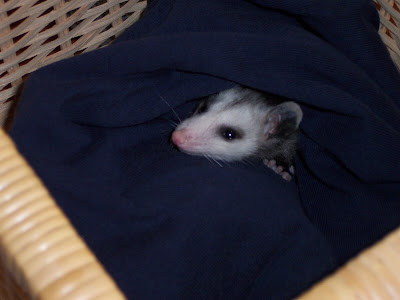 I am a born sucker, and I am especially a sucker for furry creatures. I once found a baby opossum on the curb beside my car. It was no more than 3 inches long and was so young it seemed unable to move on its own power. When I approached it hissed so loudly and ferociously that its little body shuddered from the effort. I had to admire the gumption.

All practical sensibility told me to leave the little furball alone. What do I know about raising an opossum? I don't think my dog would welcome the rodent as a playmate, and how would I explain it to the neighbors? Also, opossums can carry the hanta virus (which causes bubonic plague) and rabies.

I looked up at the crows gathered on the nearby light pole. It would only be a few moments before one of them would investigate the pathetic hissing at my feet and sweep in for a mid-morning snack. I sighed, swept the little opossum up in my hand, and jumped in my car.

I started cursing myself as soon as I closed the door. In my care, this little furball was as doomed as if I had left it for the crows. The difference now was that its death would be my fault, my act of cruelty. And what if it thrived? How ethical is it to keep an opossum inside a two-bedroom apartment for the rest of its life? Could it be happy hanging from my light fixtures?

I brought the little furball home. For the next several hours, I searched Google for answers on how to be a proper parent to an opossum. I learned that opossums like Gatorade and Pedialyte. They are lactose intolerant (which is perhaps the one thing we had in common). They need to be gently squeezed in order to pee and poo. Anxiety about the opossum's welfare consumed me for two days. At one point, I even lost track of the little furball and spent a frantic hour upturning my apartment and scouring my dog's mouth for signs of dog-on-opossum violence.

My good friend Kevin came to my rescue by locating a opossum rehabilitation center (who knew?) that was willing to take in my furry ward. I wrapped the little furball in an old sweatshirt, stuffed it into my most presentable basket, and drove fifty miles to the center where I dropped it off on the porch. I also left $40 of guilt money to defray some of the center's costs. As I drove away, I was overcome with the same selfish, gushing joy I felt when, as a child, I tossed a hot potato to the kid beside me just as the music stopped.