I very rarely lose my temper.  Perhaps because I am not much taller than a garden gnome, I have cultivated a tendency to avoid confrontation whenever possible and forgive as quickly as possible.   By and large, this is a good thing and lets me glide through society with the benefit of the doubt on my side.  It's not a bad gig.

Unfortunately, though, because I don't often get angry, I have little practice in managing my anger and therefore have appalling lack control over it.  Within seconds of the moment I feel the first flare of anger, I spiral from frowning with disappointment to hissing invectives to yelling incomprehensibly at the top of my lungs to crying unconsolably with bitter self loathing.  Given the opportunity, I will hurl something precious to the ground and then stomp on it with the passionate desire to make things worse for myself.  It is only slightly improbable that I don't also turn into a hulking green monster.

The last time I lost my temper was sometime one year ago.  It was winter, and I went to Lake Tahoe to ski.  I was outside, on a mound of snow beside the chair lift, trying to put on my ski equipment and getting increasingly frustrated with each failure.  My bindings were not adjusted correctly, and it was tedious work trying to turn the screw that tightens them up using only the flat 1x1 inch of metal that came with my skis.  I'd then test the adjustment, only to have my heel pop out of the binding while simultaneously pushing the ski down the mound.  I'd then have to rock-step in my uncomfortably rigid ski boots down the mound to fetch the ski.  This would happen again and again.  Meanwhile, my friends were already on the hill and I felt impatient to join them.  I could feel my blood begin to boil as my frustration mounted.  At long last, I successfully fitted myself to my skis and was ready to head to the chair lift.  I reached for my ski poles and pushed off.  Just at that moment, one of my poles collapsed beneath my weight and I stumbled sideways into the snow.  Instead of traditional ski poles, I had opted to use telescopic trekking poles that expanded at a joint.  The pole collapsed because I had failed to properly tighten the locking mechanism at the joint.  It was a moment of exasperation that I could not endure.

I wrapped both my hands around the handle of the offending pole like a baseball bat and began slamming it repeatedly and with vengeance into the snow.  I also started to curse in a refrain along the lines of "Why did I &;^# buy this mother-&#$% pole. I can't stand this $%#$.  Why can't I ever do any #%$# thing right. What a &^#% waste. I am a @#$%# idiot." While this scene might not be unexpected at a golf course, the people in line at the chair lift likely took a big, collective step away from me.

The scene came to a quick end, though, when my pole broke in two at the joint and the loose piece flew away from me and bounced down the mound.  Despite the fact I had, just a moment ago, been violently abusing the pole, the sight of its irreparable break shocked me into unmoving silence.  I had loved this pole.  This pole was a state-of-the-art, shock absorbing, insanely light carbon trekking pole.  I had painstakingly researched trekking poles before selecting this one and had paid a not-insignificant amount of money for it.  Most importantly, this pole had supported me on one of my proudest achievements -- the summit of Mt. Baker.  It got me up and down glaciers.  It pulled me out of waist-high snow.  It gave me footing over icy rock.  Suddenly I felt mournful.  My anger melted away and, as usual, gave way to regret.

RIP my dear poles.  You served me well. 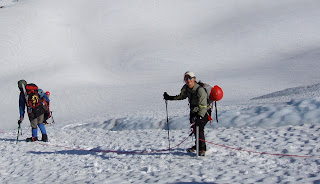