I ignore a lot of problems.  Because I'm tired or don't know what to do about it, I often let a problem sit where I found it until I become accustomed to its being there.  The problem, in turn, silently festers and grows until the ripe day when the problem refuses to be denied any longer and mounts a takeover of my life in the style of "shock and awe."

For weeks, I have been listening to the skittering of claws on the roof of my home just after dusk.  "Opossums," I told myself, "nothing but opossums."  Then, in the mornings, fresh little paw prints would appear my car's windshield in a criss-crossing pattern that reminded me of the floor of an Arthur Murray dance studio, and I would imagine a pair of squirrels ballroom dancing on my car.  Finally, I started to find dark, oval pellets of mistakable poo on top of my car.  "Could rabbits have gotten into my garage?" I wondered.  "Cute, fuzzy rabbits?"

The problem at last unveiled itself to me in a naked and devastating light.  One night, last week, I opened the door to the garage to do some laundry.  I flicked on the overhead light and froze in panicked disgust when I saw, poised on top of my car, a rat.  A big, brown rat.* 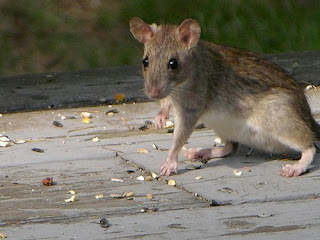 The rat eyed me in a completely unconcerned way.  It did not back down from my car and scurry away. Rather, it sniffed the air, in that signature, rodent way, and then bobbed its snout at me as if to say, "Yo."  I, on the other hand, retreated back into my house, slammed the door, and let out a curdling squeal.

It's hard for me to casually enter the garage now that I know a rat has been pooping all over the place.  In fact, it is likely to be that rat, his buddies, and his extended family because it's hard to imagine only one rat making this much poo. 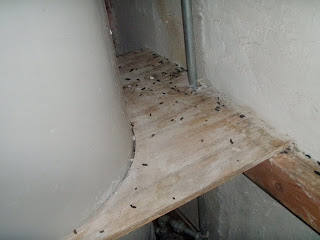 The rat has so far won this round.  I have put in a call to the professionals to rout them out.  If that doesn't work, I'll send in some cats.  Big, bad-ass cats.  Bruce Willis cats.


*  Photo of the roof rat was taken by someone else and used here in accordance with Creative Commons license.  See attribution here.