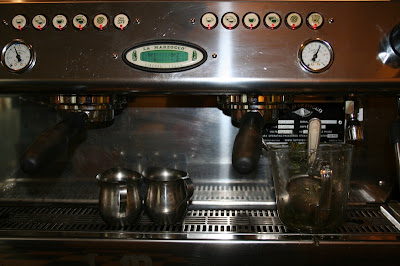 There is an espresso machine like this one (pictured above*) at my workplace. I see it several times a day -- whenever I go to the restroom, whenever I wash my coffee cup, and whenever I grab some drinking water. I always know it's there, and I know exactly where it is.

For those of you unfamiliar with espresso machines, the steam wand is the pointed, stainless steel valve that releases a gush of hot steam to create the milky froth required for cappuccinos and cafe lattes. It can heat a cup of milk to 150 degrees in less than 10 seconds. It gave me a sizzling second degree burn in less than 1 second of contact. The skin on my arm first became red, then bubbled up into a hot blister of the same shape as the steam wand.

According to the medical advice available on the internet, I discovered that one should go immediately to a hospital emergency room for treatment of any second degree burn larger than 3 inches in length. Looking at my arm, I estimated that it was closer to 2 inches, so I slapped on a band-aid and went back to my desk. The burn eventually healed, but I still have the scar.