As I was going through old photographs, I found evidence of some vintage moron tax.

I spent a year in England during college. During that time, some friends and I visited a pretty park that overlooked the famed Dover Cliffs. The park itself was made of small rolling hills covered with lush, green grass. While strolling there, my Swedish friend Lotta and I became seized with the desire to logroll down one of the hills, as we remembered we did as kids back home. I think we imagined that we'd emerge at the bottom giggling and renewed with sweet memories of our youth.

Reality, of course, trumps nostalgia. And the reality is that a body rolls down a hill faster than one would think. Also, one's feet and legs roll quite a lot faster than one's shoulders so that a person doesn't roll in a linear direction as much as swivel awkwardly around the torso. Despite the short length of the slope, Lotta and I had to reposition and relaunch our rolling at least twice. There is also the matter of the head which is not stable or supported. In fact, it bounces against the ground with a thunk thunk for every rotation.

My friend Kevin -- who was always smarter than the rest of us -- predicted what was going to happen. As Lotta and I took our positions at the top of the hill, he waited at the bottom with his camera.

Kevin snapped this picture (below) shortly after we started our descent. 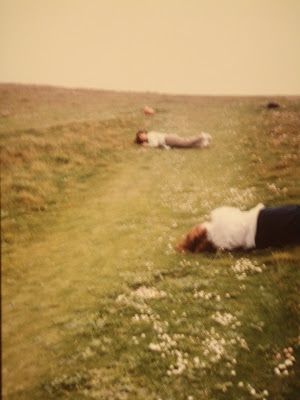 Kevin took this picture (below) when I finally came to a rest -- dizzy, bruised and moaning. I had to lie there for several minutes before I could stand without vomiting. 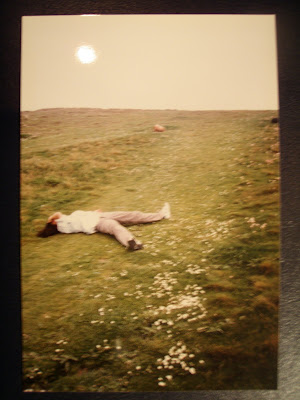