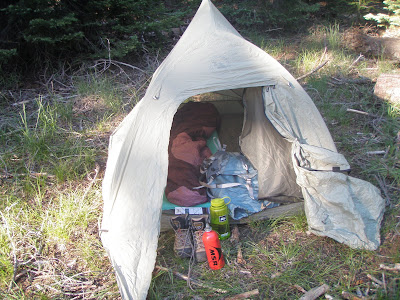 There are many times in my life when I do not know if I am being brave or stupid. Is the person charging outside with a baseball bat when she hears the backyard gate open a titan of fearlessness or a potential Darwin Award winner? Or what about the female jogger who gives the middle finger (with both hands) to the two evidently-drunk men hurling sexual comments?

This Fourth of July I decided to do a three day backpacking trip to an alpine lake situated about ten miles into a national forest. I also decided to do the trip alone. Several friends tried to dissuade me, encouraging me to postpone the hike until I could find a partner. I, however, felt adamant that I did not want to waste long weekend of beautiful weather at home, on my couch, watching reruns of Sex in the City.

I drove about five hours on the highway and another one and a half on an unmaintained country road to reach the trailhead to my hike. I put on my heavy backpack and started walking up the long switchbacks toward the mountain pass. When I reached a small meadow at the top of the mountain, I stopped to camp for the night. I pitched my tent below a tree canopy. The ground all all around me was covered with twigs that crunched beneath each step. I placed my plastic bear canister containing all my food about fifty feet away from my tent and settled in for the night.

At about eleven o'clock, I bolted awake to the sound of banging plastic. Oh my god, is it a bear? My heart thumped hard against my rib cage. The night was completely dark, and I could not see past my tent walls. I had no idea what was out there. I froze, listening. I could hear twigs crunching not far from tent and in the direction of the bear canister. Then, appallingly, the crunching came closer. Something was walking towards me. I held my breath. The crunching came to a stop just outside the entrance of my tent. The animal was so close to me, I could hear it sniffing the ground. I almost peed in my sleeping bag.

In a full throttled panic, I grabbed my headlamp, turned it on, and frantically flashed its light in all directions within my tent. A couple of years ago I had come up with the unsupported and until-now-untested theory that wild animals would not attack a person with a headlamp. A mountain lion, as the theory goes, would conclude that the food it commonly eats, such as deer, does not typically emit artificial light. Of course, I failed to consider the possibility that a wild animal suddenly frighted might attack rather than flee.

Luckily, the animal outside my tent was startled by the light and swiftly ran from the spot. I was feeling victorious and almost proud of my quick thinking until I noticed a familiar-sounding metal jangle as the animal moved away. I poked my head out of the tent and, to my embarrassment, saw a large dog jogging back to its owners who had just arrived at the meadow to set up their own camp. They stood only a few yards away and must have witnessed my bizarre light show. Though it was dark, I was sure I could see them suppressing some laughter.