Pieces of Me (Part II)

WARNING: This posting continues my story of a self-inflicted injury (see Pieces of Me (Part I)). If you are squeamish about pain and blood, you might want to skip this posting and revisit the blog later. I promise the next posting will be gore-free.

When I arrived at the nurse's office, the nurse was chatting on the phone. She glanced at me and casually waved for me to sit down on the waiting bench. Exhausted, now, from my panic, I slumped onto the bench without any protest, cradled my injured hand, and waited.

The nurse soon noticed the small pool of blood congealing at my feet. She lept up, grabbed my wrist, and, with surprising strength pulled me over to the sink. Before I could even brace for the pain I knew would be coming, she turned on the faucet and plunged my finger under cold water. It hurt just as much the second time around.

The nurse dried my hand and methodically wrapped my finger in a voluminous amount of gauze. If you had passed by me then and caught a glimpse of my finger out of the corner of your eye, you couldn't be faulted for thinking that I might be holding a stick of cotton candy. The nurse patted me on the head and sent me back to my classroom. When I returned to class, I was mortified to see the janitor mopping up my blood. 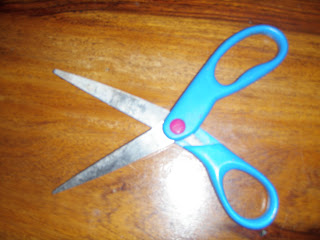 Later that night, I was cowering in my bedroom when my parents came home from work. My parents are loving people, but they ascribe to a discipline of tough love. As a rule, injury that I brought upon myself -- tripping over my feet, falling down stairs, walking into doors -- would be met with criticism about my carelessness rather than kisses on my boo-boos. So, having just inflicted upon myself an injury far greater in magnitude than anything I had previously done, I was very afraid of what would happen when they unveiled my wound.

My parents immediately called me down the kitchen. I stood, closed my eyes, offered up my finger, and quietly wimpered as they unwound the thick layer of gauze. When they finished unraveling, I could hear them hold their breath as they grasped the extent of the damage I had done. My father asked sternly, "Where is the fingertip? Did you bring the fingertip back?" I started to explain that I had not thought to preserve it. He demanded again, "Could we find the fingertip? If we went back do you know where we could get it?" Until this moment, it hadn't occurred to me that such a thing could be reattached. I started to cry.

My parents began whispering to each other in Mandarin. I took this to be a very bad sign. As a household, we mostly spoke in Taiwanese. My parents reserved Mandarin for only the most serious topics, like finances and whether or not to put down the family pet. As I didn't understand the language well, the best I could grasp was that there was another problem in addition to the fact that I was missing a fingertip.

My mother went to the cupboard and pulled out a bowl, into which she poured a small amount of hydrogen peroxide. My father, in the meantime, reexamined my finger and tugged lightly at the gauze still around my finger. I was about to ask why they hadn't fully removed the gauze, when I looked again at my finger. And then I understood the problem.

When the nurse wrapped my finger in gauze, she placed the gauze directly onto my muscle without any padding. My finger had continued to bleed, and the blood had seeped through the first few layers of gauze. The blood then hardened into a stiff, thick clot, sealing the gauze against my muscle. To prevent infection, the gauze had to be removed.

We were all silent now. My parents led me to the bathroom where the sink was closer to my reach. My mother placed the bowl of peroxide beside the sink, drew me close, and clenched her hands over mine so that only my injured finger protruded from her grasp. My father grabbed the ends of the gauze firmly. My parents looked at each other and, with the slightest nod between them, my father jerked the gauze, yanking the clot free from my finger. My mother then swiftly dipped my finger into the bowl of peroxide.

I remember hearing the sizzling of the peroxide as it came into contact with my reopened wound. I don't remember much else after that moment as I might have blacked out from the pain. In any case, it's safe to assume that my parents likely washed my finger in the sink under cold water for the third time that day.

**This posting is continuing a story from an earlier posting.