As I mentioned in an earlier post, as I am moving into middle age, I have started using my breasts for personal shelf space.  Most of the time, I manage to keep this unsightly habit within the four walls of my own home where only dog can feel embarrassed by me.  Unfortunately, it is only most of the time.

A few days ago I wore a short-sleeved t-shirt to work.  In the early part of the day, I got a little chilly so I brought a cup of hot tea from the kitchen back to my desk.  The mug of hot tea felt so warm and soothing in my hand that, as I often do at home, I rested the bottom of the cup on my bosom to warm my chest.  Because the heat was not penetrating enough, I lifted up the collar of my shirt so that I could nestle the cup directly against my skin.  I sat like this over my desk until someone jarred me out of my small moment of bliss.  "Wendy," a voice said with a barely-suppressed laugh, "I'm so glad that you feel so comfortable with us."

Ah yes, I had forgotten the matter of coworkers.  At work, I sit in an open-style cubicle surrounded by at least four to five co-workers.  Two of them were now staring at me from their desks, eyeing the mug tucked down my shirt.   I know at least one of them was noting to herself, "Remember never to use that mug."
No comments:

Too Good to be True

A few years ago, I discovered a fascinating new food product on the shelves of my local Trader Joe's  called, "Banana Crisps."  I picked up the bag and examined the golden crisps inside.  You could see they were slightly shiny and enticingly sprinkled with crystals of salt.  I marveled at how light and delicate the crisps felt.  I turned the bag in my hand to examine the nutritional content, assuming that the crisps would be sinfully fatty and caloric.  And I saw...could it be?...only 40 calories and a mere 1 gram of fat per 2/3 cup serving!  I stood in the aisle in stunned wonder.  Was I holding the treasure that I had spent a lifetime hunting with the passion of Ponce de Leon?  Healthy junk food, it exists!  With a few darting glances around me, I swiftly stuffed the entire inventory of banana crisps into my basket, paid, and left the store

I was not more than two feet from the automatic doors of Trader Joe's when I popped open a bag of banana crisps and crammed a handful in my mouth.  Oooooh.  At the first crunch, the crisps were delicately light, like classic Lays potato chips.  Once crunched, the crisps then dissolved in your mouth like cotton candy.  The taste was only mildly banana, with a satisfying saltiness and just a touch of sweetness.  I thought about the conventional banana chips -- those thick disks of deep fried banana you find in crappy trail mix and are harder to chew than pennies -- and I crammed another handful of banana crisps in my mouth.  This was miracle food for less than $3 a bag.  I walked away from Trader Joe's feeling like I had robbed the place.

From that point on, I ate two bags of banana crisps per day.  I ate them for breakfast, I ate them for lunch, I ate them sitting in front of the television.  I put them in yogurt, on ice cream, and -- I kid you not -- inside peanut butter sandwiches.  Not one to be too selfish, I evangelized them to all my friends and handed them out to my co-workers.  "Only 40 calories and 1 gram of fat per serving!" I'd sing each time I held out the bag for someone to grab a handful of crisps.  When anyone asked me how something so fried and yummy could be healthy, I'd say "They're from Trader Joe's!" as if that could possibly explain anything about sugar and fat.

The hammer eventually fell, of course, on my bubble of delight.  One day, Trader Joe's suddenly stopped stocking the banana crisps, despite its popularity.  It was not until several weeks later that Trader Joe's restocked the banana crisps.  A little sign was tacked nearby the new stash, informing me, the dear consumer, that Trader Joe's had revised the nutritional label to correct misinformation.  Misinformation?  I took a bag from the shelf, turned it over, and looked at the new label.  The calories were now revealed to be FOUR TIMES the original calories and SIX TIMES the original grams of fat.  I slumped against the wall of the chips aisle, and  I thought back on my eating habits.  According to my quick calculations, I had been ingesting, from banana crisps alone, close to 2000 calories and 72 grams of fat every day for three months.  I looked down at my flabby stomach and pinched my flabby thighs.  "So, I guess I'm not just retaining water."
5 comments:

A Day in the Life

Last Friday, I took a few photos of the back of my right hand.   I had just washed my hand and was wincing a little from the sting of the cold water on a few open wounds on my hand.  And it occurred to me that my hand was a perfect diary of the perfectly avoidable self-inflicted injuries that I go through in a week.

On Monday, while reaching for an apple from the refrigerator, I took a circular hunk of flesh out of the knuckle on my middle finger.  Not only do I not know how I did it, I could not find the missing chunk of skin which is probably now fossilized in my fruit drawer.
On Wednesday, I went to the bathroom at work and, as usual, went through my bathroom routine with all possible speed.  At some point, I whipped my hand into the sharp metal corner of the toilet paper holder.  The sharp corner stabbed my middle finger, just below the knuckle.  By the time I left the bathroom, I had a swollen, purple bruise about a quarter inch long. 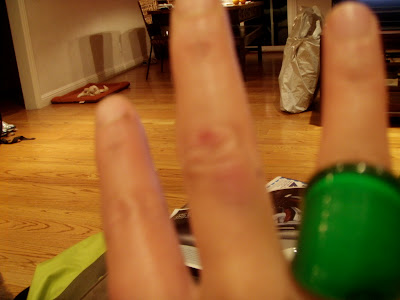 On Thursday, I decided to sit on the couch and eat some yogurt.  While peeling back the foil on my yogurt cup, I fumbled the yogurt cup and, in recovering my grasp, cut my index finger on plastic rim.  The resulting gash was a quarter-inch long and bleeding. 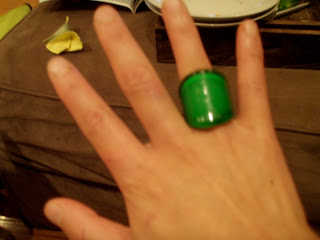 In case you are wondering about that half-moon cut you see below my index finger, that's the scar from the gash I gave myself with a frying pan back in April.
1 comment: