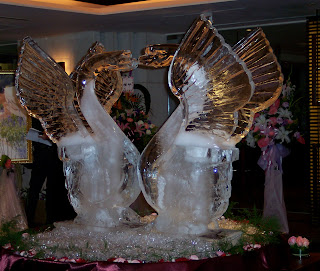 I find weddings stressful and awkward.  With few exceptions, you're stuck for hours with strangers grasping for chit chat.  I'm usually wearing an uncomfortable dress that I outgrew four years ago because I'm too cheap to spend $200 on a new dress after I've already blown $750 for plane tickets, hotel room, rental car, and gift.  Because I'm unmarried, I usually can't bring a date and am banished to the back in the room, behind the pillar, seated by the guy who talks about his gum transplant surgery.  At every wedding I've attended in the past eight or so years, someone has stopped me with the same, relentless joke: "You're next." Once upon a time, this sounded like a kindly wish.  Nowadays it sounds as if I've been singled out for a hit, and I'm left with the nervous feeling that, any moment now, my ovaries might explode out of my body, hog-tie the nearest single man, and drag us both to the altar.

On top of all these trying circumstances, there is the keen pressure to be joyous.  You're here to celebrate after all, and you must smile, you must chatter about the flower arrangements, you must dance the Electric Slide.   It takes a superhuman quantity of resolve to endure a wedding with grace.  Suffice to say, I don't have nearly that resolve.  Just two minutes ago, I couldn't resist eating the rest of the cake I brought home from dinner.

I have, consequently, committed a lot of wedding-related sins and faux pas.  Here are a few highlights: